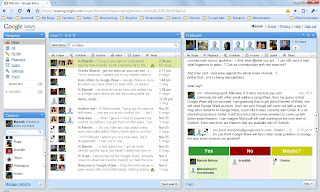 I started a wave to discuss what Google Wave is all about. I have added folks to the same wave as they I sent out new invites to more people I knew. My first impressions about Google Wave:

An interesting conversation on our wave:

I have wondered about one thing though – one of the features of eMail is its ability to communicate across providers… I don’t what @what you are… I can still send a mail… what happens to wave…? Can we communicate with non-wave-ers?

And if we can’t – isn’t wave against the whole funda of email…?

(either that – or it is being monopolistic)

Interesting point. If it turns out that you can’t communicate with other email address using Wave, then my guess is that Google Wave will not succeed. I am guessing that to get the full benefit of Wave, one will need Google Wave account. And I am sure Google will come out with a way to map other domains to Google Wave, much like it does currently with Gmail. It is an interesting business model. It will also force other email providers to come up with better email features. I can imagine Microsoft will start working on the next level of Outlook. Even now there are features that are available only in Outlook.

Poll – Do you think Google Wave will force other email providers to change the way email services are provided?

Google Wave may not be able to force a change in email services. However, it would definitely affect instant messaging and collaboration.

So there you are… still early days for Google Wave to say which way it will go.