Everyone’s talking about Twitter. So here’s my addition to the conversation based on my experiences with Twitter as @manishmo.

To me it is various forms of IM, asynchronous chat, chat room, email, SMS on the Internet, blog (micro-blog) depending on how you use it.

It’s important to think about where you want information to live, and how you want it to impact the world. For everything you toss into a stream rolls past, and if I’m not at the stream when you throw your leaf onto the waters, I’ll miss the leaf entirely, or perhaps catch only the ripples. 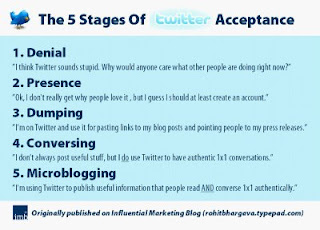 I think I am somewhere in stage 2, 4 and 5!!! I have had some 1×1 conversations, published some useful information. I have made met new people on Twitter, just like I did when I started to blog or using Facebook. But I still don’t really get why people love it SO much.

I started with using Twitter in the browser. I tried Twhirl client. However I have now settled on using TweetDeck. TweetDeck is an AIR desktop application. It provides up to five multiple column display (if you set it that you can set to to Narrow columns in Settings). I usually have one column for replies, one for friends, one for search results. Remaining two column can be used for Direct messages (don’t have many so don’t use it for this), another search result or seeing info about Twitterers (!). Update: Now that I have used TweetDeck for a while, I have figured that it allows you to organize people you are following into groups. You can add columns for your groups. This really makes it easy to manage the large volumes of tweets.

I found some useful and some completely useless but fun stuff services/utilities that give you information about Twitter accounts.

follow cost provides you with useful information about average number of tweets by a user. Useful to know what you can expect when you start following someone.

TweetWheel in an interesting application that shows how your friends are connected to each other. This may take a long time if you have many friends.

TwitterFriends provides some stats about your conversations. Not useful if you are just starting out.

If you are feeling bogged down with email, don’t even think of trying Twitter.

Would I recommend or encourage Twitter’s usage in corporate environment? Well, I am not really sure but I am tending towards a ‘No’ at this time. If there was a Twitter behind the firewall with only employees of the company as users forming a reasonably homogenous user base, then maybe. But in its current state, Twitter can be a real distracter. It needs quite a discipline to manage your follow list. So if you typically work with 10 tabs open in your browser and multiple windows open on your screen, then yeah sure. But Twitter is not for everyone.

Based on inputs from Tom, I have started Yammer in my workplace. It was slow start initially but seems to be picking pace now. I started with introducing a few people to Yammer and the tribe has now grown to 55 of us on the Yammer network for our organization. The message are now starting to come in from more users.

This post is part of the Work at Learning/Learning at Work blog carnival hosted by Dave Ferguson on his blog Dave’s Whiteboard.